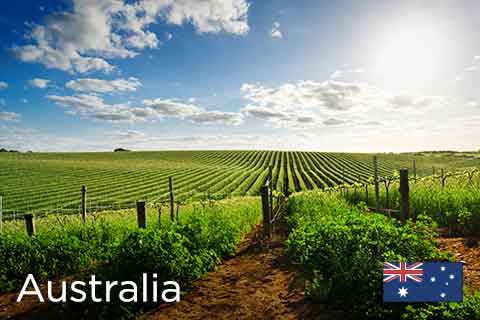 Shop for Wines from Australia

The wines of Australia are considered “new world” wines. They don’t have the history of France, Italy, or Spain which are many centuries old, but that doesn’t mean they haven’t carved out an important niche of their own.

One cannot think of Australian wine brands without thinking of Yellow Tail, Alice White, Jacob’s Creek, Rosemount, or Penfolds, whose esteemed Grange wine may year-in and year-out be the best and most important wine produced from the Shiraz grape in Australia.

Speaking of, the most important grape in Australian wine is indeed Shiraz, whose deep, plush, black and purple fruit flavors brought many wine consumers to buy their first wine from this country. Significant achievements have also been made in Australia with Cabernet Sauvignon, Chardonnay, Grenache, and even cooler-climate grapes like Riesling and Pinot Noir.

More than half of all Australian wine produced carries the label of South Australia or South Eastern Australia. The warm sub-regions of South Australia such as Barossa Valley and McLaren Vale are home to many red wines that get plenty of critical attention. Coonawarra, Padthaway and Eden Valley also have success with their red wine expressions while also having a slightly cooler climate to benefit the production of white wine varietals. Victoria and New South Wales are also significant regions, and wines from Queensland, Tasmania and Western Australia are reaching North America more frequently.