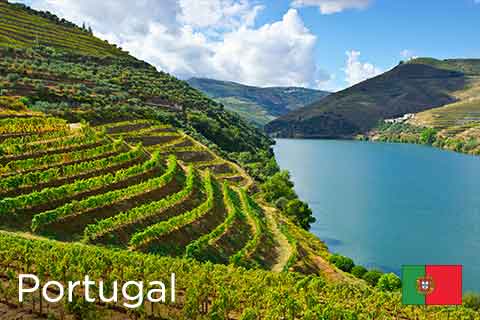 Portuguese wines are rich in history, with winemaking in Portugal dating back to the Roman Empire.

Portugal is most famous for Port (or “Porto”) wines, which have been produced since the 1600s. Port is classified as a fortified wine and is made in several different styles, including Ruby, Tawny, Vintage, Late Bottle Vintage and Colheita. Madeira is another example of fortified Portuguese wine.

White wines in Portugal are most commonly represented by a light, bubbly, low-alcohol wine made from grapes with low sugar content and are called “Vinho Verde”. Examples of Vinho Verde do exist in red and rosé varieties but are most typically sold within Portugal.

Other Portuguese wines of note are the dry red (still) wines from important areas such as the Douro Valley, Dão, and Alentejo. These wines have improved in quality over the years and are becoming popular worldwide.