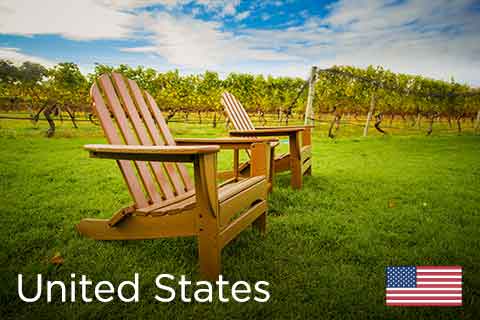 Shop Our Selection of US Wines

The history of US winemaking dates back to the 1600s, when colonists planted vineyards in Virginia and, soon after, Pennsylvania. Early attempts met with considerable hardship, however, as settlers didn't care for the taste of some of the native American grapes and European vines shipped in were often destroyed by pests and vine disease. It wasn't until the 1800s that commercially successful wineries started to take hold in the U.S., only to have their growth stunted by more vine epidemics in the late 1800s, and later by Prohibition.

Following the repeal of Prohibition, US winemaking gradually recovered. In the 1970s and 80s, California wineries started to make waves in the international market. Today the United States is one of the world's foremost wine producers, ranking behind only France, Italy and Spain in total wine production.

The vast majority of US wine production comes from the West Coast, and the vast majority of that is from California wineries, which produce almost nine out of every 10 bottles made in the U.S. Washington and Oregon wineries are also significant producers, and New York wineries are beginning to establish a reputation for fine wines, with Finger Lakes wines and Niagara Escarpment wines earning critical acclaim.